Have you ever looked into how Wikipedia handles controversial subjects? It seems pretty impossible to have anonymous people with opposing views collaborate. Well, in reality there is a backstage "Talk Page" to each Wikipedia article where the authors can talk and debate.

Talk is a pretty accessible link, shown like a tab above every article. Many Wikipedia clones have a similar interface and it can be a much more interesting read than the article itself. For example Talks page on Bitcoin scarcity (opens new window). This conversation is truly a time capsule -- mentions of Mt. Gox and all.

I am taking the side of Atheros on this one; furthermore, I'd argue that Bitcoin is not three things:

I want to primarily discuss #1 because I hear that a lot.

The idea for scarcity comes from the fact that the Bitcoin protocol allows for a finite number of mined coins. Yes, I understand that part. I will argue below that it may not matter.

One of Vitalik Buterin's most famous write ups is "The Meaning of Decentralization". There he talks about how "being decentralized" is not a single quality of a network. He counts three aspects of it:

So a system can be Architecturally decentralized but in the hands of a powerful group, making it centralized.

My argument is that Bitcoin's architectural specs alone are not sufficient to create scarcity.

Let's start with the influence of the exchanges. Take a look at the below screenshots. The left is from CoinMarketCap and the right is from BitInfoCharts. The screenshots show the transaction volume of Bitcoins on January 29, 2021. Why aren't the numbers the same? 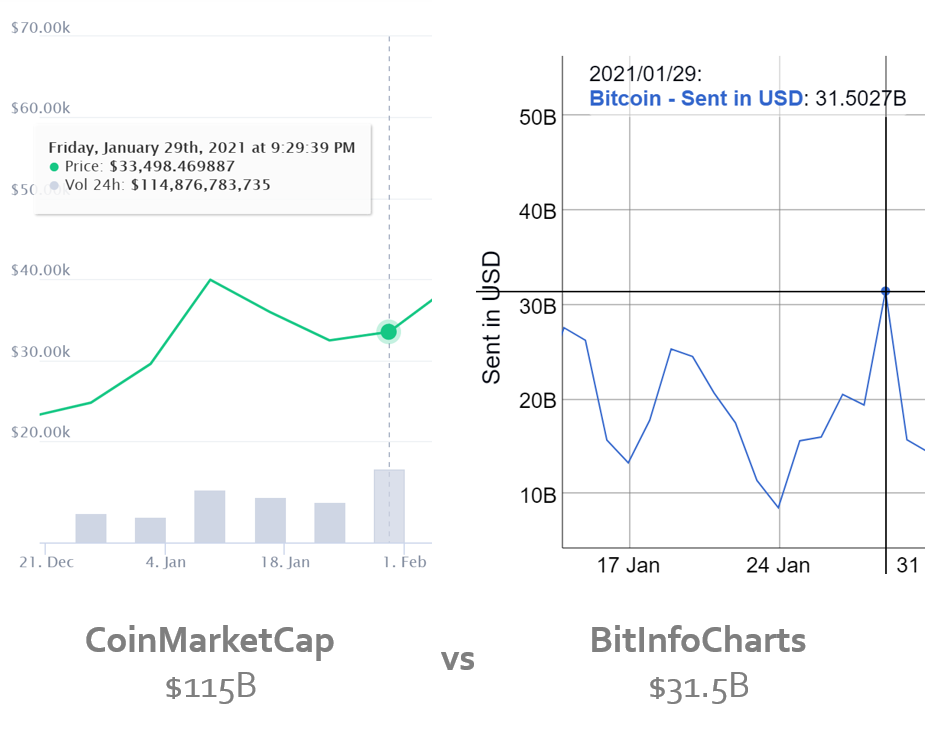 The answer to that is simple. The roughly 31.5 billion dollar figure of BitInfoCharts comes from the transactions posted on the blockchain. In addition to those amounts, CoinMarketCap monitors the Bitcoins transferred within exchanges which cause the difference.

Why do exchanges move so much money outside the blockchain? for one thing, posting on the blockchain has a high fee; the transaction confirmation also usually takes a long time. Instead of doing that, say, Alice wants to send Bob 10 BTC. Luckily, both of them have their accounts on the same crypto exchange. To avoid all the costs and hassle of interacting with the Blockchain, the exchange simply changes its own books to reflect the transaction.

Alice and Bob may not even have their own bitcoin wallets, and the exchange has not made them wallets either. The exchange just puts what it ows each user in a database and backs the sum of its owing as a whole. When Alice sent the money to Bob, that database changed, and the blockchain stayed out of it.

Alice and Bob may not even transact with each other. One may withdraw around the same time the other one deposits to the same exchange. For the exchange, it is just about moving the funds around.

So, the exchanges are holding a lot of Bitcoin to back their customer's funds. Bitcoins do not have anyone's name on them.

So you probably realize why the above is being discussed online, and it's a Coinbase FAQ. If the sold Bitcoin is not backed, is it scarce?

# All The Gold In The World

Imagine you want to buy gold. You have no intention of putting gold bars under your pillow so you use a financial entity who will give you a gold IOU. So whenever you take the IOU back to this entity, they will exchange it for that much gold. Let's say you learn that the entity is operating with a fractional reserve. 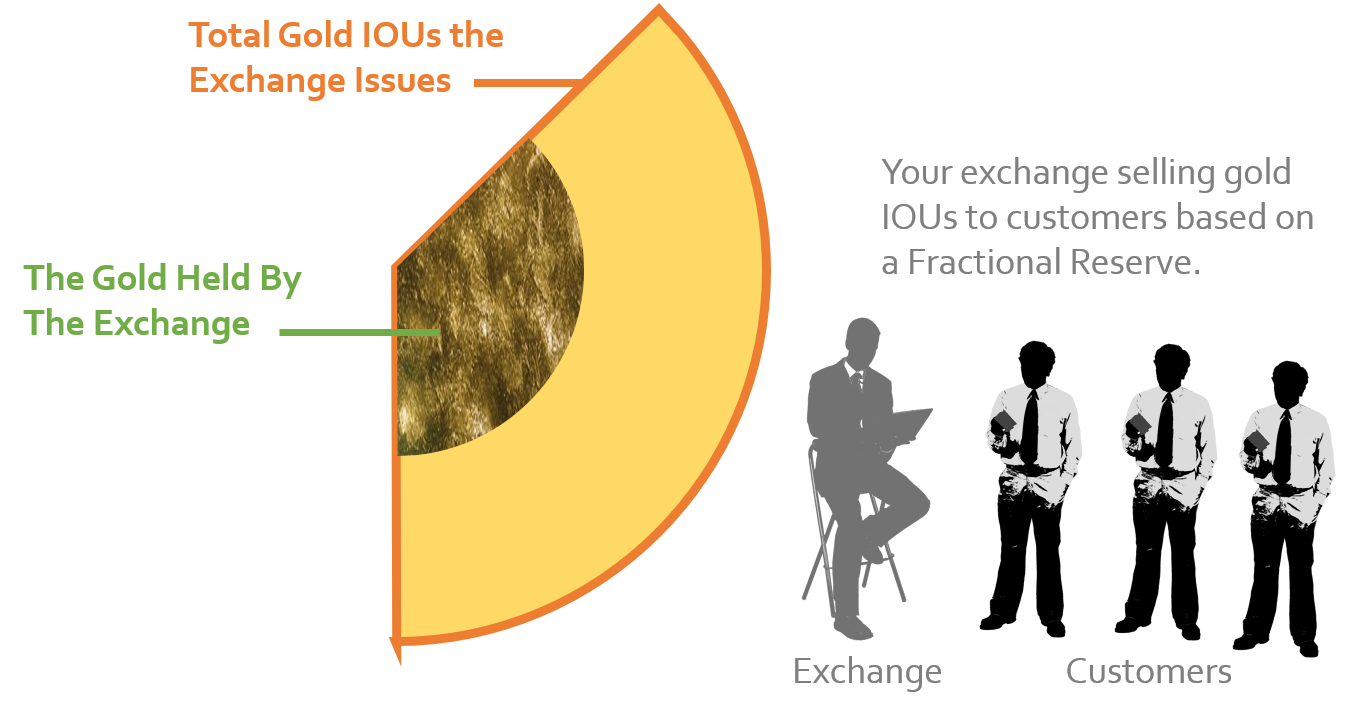 This may not be a cause for concern. However, what if you learn that there are many other entities using fractional reserve and (here is the important part) almost all gold in the world is in the reserves of these entities. Each entity is doing the sane fractional backing of the assets they give the market, but in total, there is not enough gold on the planet to back up all the IOUs given! 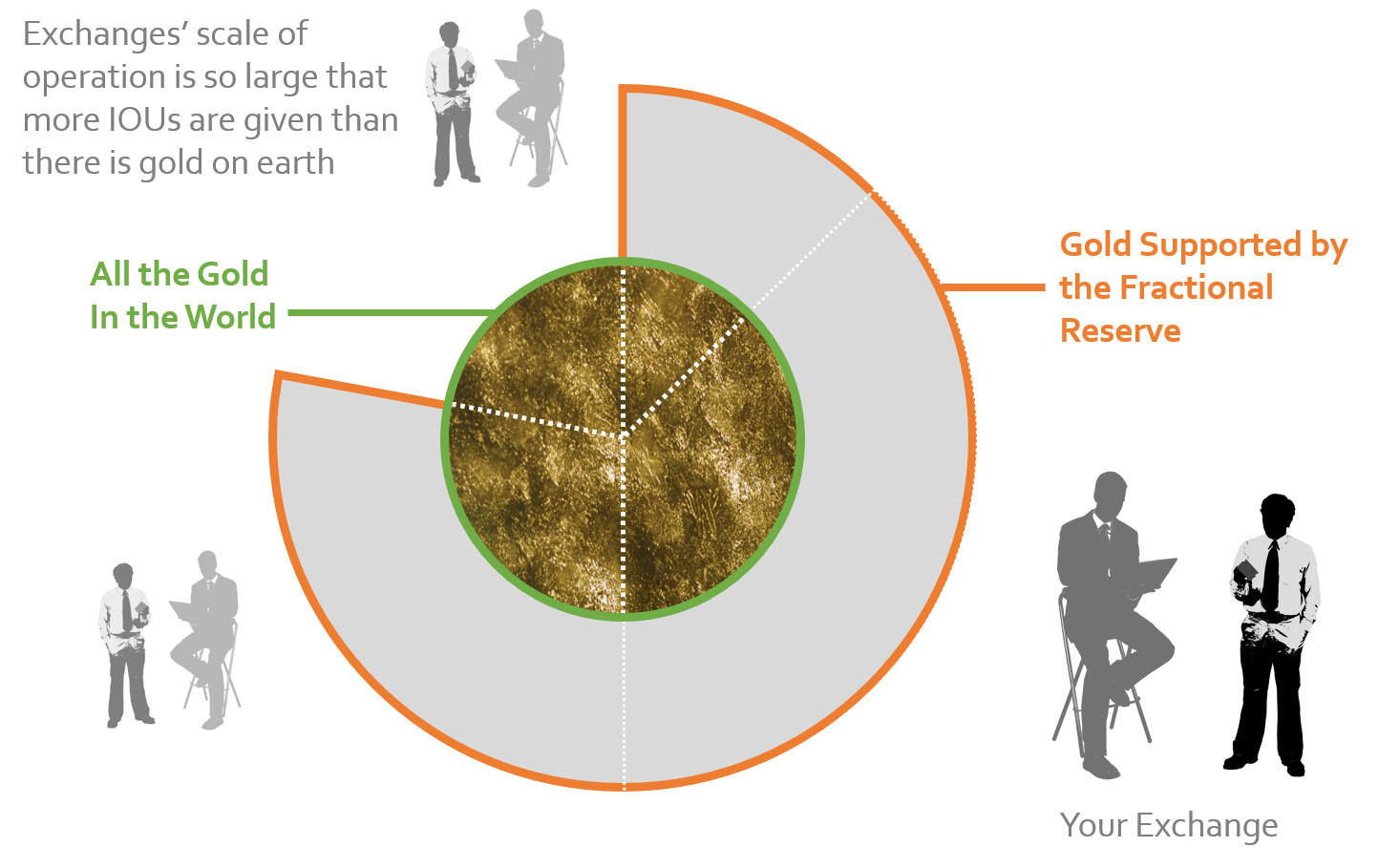 I have to clarify something here: This may absolutely turn out just fine. Picture that the IOU Gold holders rush to the bank to get their gold out. The bank only has 30kg of gold for the 100kg it has sold. Somehow however, everyone comes out of the bank after receiving their gold.

How would that be possible?

The first person in the line goes to the teller, puts in their IOU and gets their gold. Then the teller asks "so what are you going to do with this gold?" the person may answer "I don't know, that's probably why I let you hold it for me in the first place." In that case the teller knows what to do: "How about I buy it from you at the market price?"

As long as the bank has enough cash to circulate all the gold, they can make everyone happy, even in the worst case scenario.

Now replace the gold in the above metaphor with Bitcoin. How bad would it be if an entity uses fractional reserve on Bitcoin?

For Bitcoin it might work even better than gold. The network is so limited that any rush skyrockets the transaction fees and backlogs the mempool for a long while. So the liquidity is limited on the blockchain in the short run and that would slow down any rush to the exchanges.

Let's go even further. What if there are no Bitcoins in the first place? In the gold example, suppose that a new entity wanted to sell gold IOUs, but the rest of the market is in control of gold. This entity may realize that sourcing platinum is discounted and easy while it has the same price patterns as gold. The entity may find it possible to use platinum as a synthetic asset for its IOUs.

What we didn't talk about, is the legality of all this. The US has frequently shown its attention to the subject matter. Moreover, SEC has not been only concerned with activity within the US -- the case of TON (opens new window) clearly showed that.

It's not hard to understand why individuals and corporations are not allowed to print money. The real question is how well can this be internationally enforced? Let's say someone wants to create an online token but the ship for ICOs has sailed a long time ago. Can they just "sell Bitcoin", but really using a synthetic asset, hoping they can go under the radar?

If the international trademark laws can provide a good surrogate for crypto-concerning security laws, the enforcement will go poorly. The trademark law's sole intention is avoiding consumer confusion. The nearly three trillion dollar worldwide counterfeit market (opens new window) sure does cause a lot of confusion.

So I would argue that unbacked Bitcoin can be put in the market. This is not an architectural issue. The Bitcoin protocol is robust around providing cryptographic proof for every coin ever created. The real issue is with how Bitcoin users are storing and transferring their money.

Bitcoin hit its block size limit back in 2016 and the daily number of accounts interacting with the blockchain peaked in 2017. Since then the off-chain solutions have been critical for the vastly increased interest in the cryptocurrency.

The off-chain service providers do provide tangible benefit for their service. They reduce transaction costs, speed up access to funds, and mitigate the risk of losing access to the funds. Things are not like the early days of Bitcoin:

Given these three conditions, existence of vast Bitcoin pools in the market without full backing does not sound far-fetched. Just like how Quadriga did it. If so, there are people out there printing Bitcoin out of thin air and the market is none the wiser. Under these circumstances, would you consider Bitcoin, scarce?